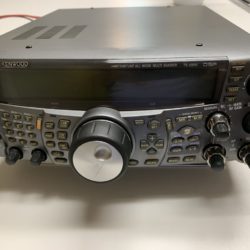 John, KG5ZOR, bought a TS-2000 for a great price.  Unfortunately, it had some issues so he brought it into the Shack last week for a checkup.

We hooked it up on the 20m TH7DX and called CQ around 6:00pm.  We received a response from a mobile station and he gave us a 5×3 signal report.  He said we were extremely weak, but since he was mobile AND the band was starting to close, we thought it was just a bad luck QSO.  We called CQ again and bagged a very strong K7.  He gave us a 5×7 with good audio.  OK, so at least the radio was working.

We then hooked up the radio to an internal whip and loaded it on 146.640 MHz.

Interesting that we couldn’t hit the repeater unless we jacked the power output up all the way. A quick audio check with KG5WNN at least verified we were modulating and the radio worked.

For some reason, the power output in each case looked low, but there was no definitive way to tell since the TS-2000 has a relative power meter.

This weekend I got a chance to check it out on my workbench.

The first item to do was to determine why the previous owner brought out a coax line from the back of the unit, terminated with a BNC connector.  After the bottom lid was removed, and some schematic tracing, it was determined that the previous owner wanted a special port to feed an external Receive Antenna.  The previous owner spliced into the onboard line and snaked a line out one of the back vent holes.   It was actually a very lousy job with black liquid rubber coating and exposed sheath and center conductors! I removed this modification and redressed the wiring with heat shrink tubing.

Next step – I then hooked up a dummy load and power meter, here what I measured:

So conceivably, the 2 contacts we made earlier on 20m were made with only 8 Watts on SSB.  Not too bad!The 1W contact on the W5RRR 2m repeater was a reasonable power level to activate the repeater since we were pretty much in line of sight with the Building 1 antenna and our power was similar to a Handheld radio.

After studying the schematic, the block diagrams, and a few searches online, it was clear that this was a unique problem.  After a full day of troubleshooting and signal tracing, I was fairly convinced that the finals and pre-final driver stage were OK.  This was a huge relief because the predriver and final transistors, 2SC1971 and 2SC1972, are unobtainium now and it would have been a challenge to find reasonably priced replacement parts especially because many of these parts are known to be counterfeits (uncontrolled Asia imports).  Whew!  Then I started to look at the low level signals to see if they were properly injecting into the driver stage- and why 80m and 160m had good drive but the other bands were constricted.    By luck, I noticed that the power jumped when I placed the oscilloscope probe on the Drain of the pre-amp MOSFET driver, a 2SK2596.  My first inclination was that the jump was induced by noise being injected by the scope probe.  So, I took an insulated bamboo pick (these are super useful on the workbench), and pressed it against that solder joint.  Voila!  Success! The power jumped up whenever I pressed that solder joint pad on that MOSFET.

After resoldering the 3 leads using my handy micro soldering tool, the power levels on HF and 2M (mostly) jumped back into compliance!  The attached photos of my resoldered pads is actually pretty poor.  I should have applied rosin to the pads prior to resoldering them.  But I was simply happy to get the solder on the pads without shorting them since it was a Surface Mount transistor and they can be pesky.  So it was good enough.

There was still an issue with 2m.  The power improved from 1W to about 40W, but the specs for this radio is 100W.  I was able to trace the lower power level to another board, but after removing a healthy handful of screws to get access to the TX-RX 1 Unit board, I decided this adventure was risking breaking fragile ribbon cables and accidently  shorting out components since deeper troubleshooting would involve powering up boards that needed to be sandwiched below another.  And since this was John’s radio, I didn’t want to risk a deeper dive into the repair.

After I buttoned it back up, a quick check showed a healthy 60W output on 146.640MHz.  More than adequate for a large signal on 2m, and only a miniscule 2dB difference between 60W and 100W.    The riddle of why it wouldn’t output 100W is still a mystery but one has to make pragmatic decisions at times.

This is a fine radio and will bring John many years of enjoyment!

Check out a few action shots of troubleshooting and repair: KG5ZOK’s TS-2000 Repair

Leave a Reply to D A Fanelli Cancel reply