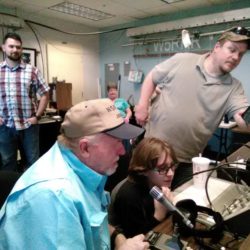 Jerry heard Gunnar, who already has a Technician license and is presently working on his General, and another student, Paul Bailey (KG5YUT), talking about electronics on the 146.86 repeater.

Jerry was not only impressed in their knowledge and skill but also their maturity and professionalism.  Because of this, Jerry presented Gunnar with a new handy-talky, amplifier, power supply (donated by member Ray Jensen (AC5KD)), and antenna along with a couple of tools.  While Paul was unable to attend, Jerry has a second kit ready for him as well.

After receiving the new station, Jerry helped Gunnar make his first HF contact to an Alaskan station on 20 meters.  Gunnar was very excited to make his first HF QSO and had an enjoyable conversation with Jim (KL7IEH).

So, to Gunnar and Paul, good luck and we hope to hear from you again and often!

Special thanks to Jerry and Ray for being an elmer and giving back to our next generation of operators.