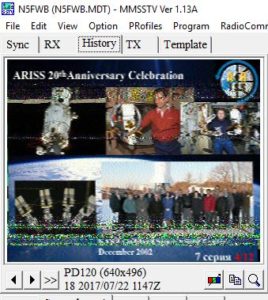 N5FWB, successfully downloaded ARISS Slow Scan TV pictures a couple of weekends ago using his TS-2000, Signalink interface and a 2 meter ssb horizontal loop.  Is is just one of several he successfully received.  Nice job, Jerry.

In commemoration of the 20th Anniversary of ARISS, Slow Scan Television (SSTV) images were transmitted using a computer on the ISS Russian Segment, which stores images that are then transmitted to Earth using the ham radio, specifically the onboard Kenwood TM-D710 transceiver. The event was only a few days long concluding at 18:00 UT on Monday, July 24.

The 20 year history of ARISS was celebrated with the pictures of 12 unique images showing the amazing accomplishments of ARISS over the last two decades. SSTV signals were be sent to earth at 145.800 MHz using FM.

Since it’s inception, Amateur Radio on the International Space Station (ARISS) has provided students an opportunity, through ham radio, to engage in conversation with orbiting astronauts and inspired many to seek careers in science, technology, engineering and math. Consider how you might inspire students in your area through this chance to capture images directly from space to their computers.