As an active NASA On The Air (NOTA) participating station, the NASA JSC W5RRR station will immediately begin on-the-air ops in commemoration of the successful Artemis Launch this morning 12/16 at 12:47 a.m. from the Kennedy Space Center.  Watch for our spots on all bands and modes, especially weekend ops.The Artemis launch represents NASA

1st of several Artemis missions to revisit the moon, utilizing the agency’s most powerful rocket booster, since Apollo.  Artemis-1 will pave a new frontier for long duration human habitation on the moon and beyond.

This mission is essentially a test drive to the moon with a mission duration of up to 42 days. The first in an increasingly complex series of missions, Artemis I will assess the performance of NASA’s new heavy-lift rocket, the Space Launch System (SLS) including the Orion spacecraft as an integrated system prior to crewed flights to the Moon.

Standing 322 ft. high, SLS will be the most powerful rocket in the world to launch since NASA’s final Saturn V “Moon rocket” took the Skylab space station into Earth orbit in 1973.

At 8.8 million pounds (3.9 million kg) of thrust, SLS is the most powerful rocket ever produced. 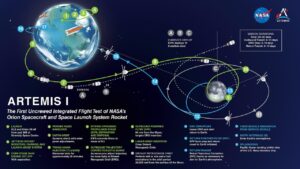