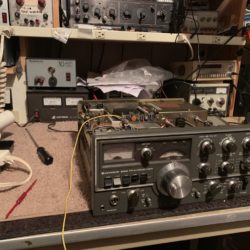 Terry, KA5TBB, has a venerable TS-520 but recently suffered from an ailment on Upper Sideband Mode. In fact, when placed in USB mode, his external digital display indicates a transmit frequency out of band. Both CW and LSB worked fine, however.

I offered to look at it. After I got it home, as we all expected…. it worked just fine. I left it on the bench and exercised all the modes and configurations several times a day for a week, but there were no signs of any anomalies.

Logically, Terry’s description of the problem leads one down the path of the Carrier Board.  This board switches 3 carrier oscillator crystals to properly heterodyne the CW, USB and LSB frequencies.

Here’s a photo of the insides (see Figure 1). Of note, it’s super clean and the boards look awesome on the upper chassis and the lower as well.  I inspected the supply bias caps and was pleased to see reasonably healthy ELNA electrolytic caps.

I previously worked on Milt’s radio and his earlier TS520 have the cheaper gray caps that deteriorated and literally flaked apart after hours of use and dried up electrolyte.

Looking at the schematic (see Figure 2), the mode switch simply applies 12VDC to one of 3  crystal oscillators to active the appropriate frequency mode.  Because it’s working, we’ve likely vindicated the mechanical switch or the diode on the USB leg which conducts to energize the USB oscillator. I used DeOxit on the rotary switch contacts to make sure the connections were kept clean just in case.

The next culprit was to look at the shunted trimmer capacitor.  Old trimmers are known suspects in RF circuits.  Trimmers have mechanical structures which rotate 2 conducting plates.  The mechanical connections in something that rotates or moves is always suspect due to oxidation or dirt.  OK, I spun it while watching the frequency counter attached to the output.  Everything OK.

The next suspect is a bad solder going.  I take the end of an insulated rod and poke and tap around.  Everything OK.

The next suspect is a lazy crystal oscillator.  I take the end of an insulated screwdriver and tap the crystal can (an old trick).  No joy.

The last test is to see if the crystal oscillator (btw, it’s a 3.3965 KHz crystal) is lazy across temp.  So I take my freeze spray and shout freon across all three crystals (see Figure 3).

Voila, the USB crystal dies as indicated by no frequency reading off the oscillator!  Interesting that the LSB (Lower Sideband) crystal seems impervious to the cold although I did finally get it to act up but it recovered very quickly.  The USB crystal recovered but very slowly. 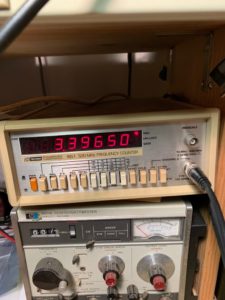 I suspect on cold days Terry would have this problem and during moderate temp days, the radio (i.e. the USB crystal) should behave.

Luckily, I found one from a parts guy on-line (Walter KD7DNY).  Walter salvaged one from an old carcass and is sending it to me, hopefully this week.

Walter is a really nice guy and stocks a bunch of vintage parts, as part of his rescue effort to us hams trying to keep the old great radios running.  He helped us save Milt K5KRM’s TS-520S radio that was passed down to him from astronaut Steve Nagel N5RAW (SK). 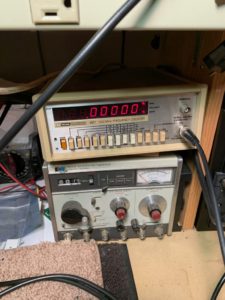