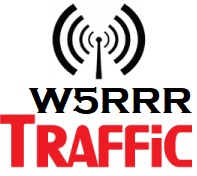 Although we’re still participating in the year long NASA-On-The-Air event, we’ll continue to spotlight NASA’s 60th anniversary milestone, as Oct 1 will be publically celebrated as the official day then NASA opened it’s doors for business.

We’ve swapped out Ken, K5RG’s, Hammarlund HQ-145 receiver with a vintage Collins 75A4.  This vintage station will be only used for CW and AM ops in continuing celebration of the 60th anniversary of NASA.

We’ve added a Collins KWM2A transceiver with a 30L1 amp for vintage SSB mode operations. This radio setup actually is only 59 years old, but we thought it’s age was representative enough to get some SSB ops on-the-air in celebration of the 60th.

A writer from the JSC external affairs office will be publishing a short article about our club’s participation of the NASA 60th anniversary. It’s planned to be published tomorrow in the online JSC Roundup. There should be a photo of Milt Heflin, K5KRM, possibly with Tanner W9TWJ in the background as his logger.

Photos from the 60th anniversary W5RRR operations were taken by a JSC photographer on July 29th. We have some nice shot of the folks who were able to attend, including KG5PGY, N8MTV, AB5SS, K5RG, WD9GET, KA9MHO and KG5URA. Will plan to post some of them on the web page this week.

Only 2 members have signed up for to cover 4 hours of the12 hour event. If you have interest, please sign up on the W5RRR.org site. The contest will run a consequetive 12 hours from 1:00 noon on Saturday to 1:00AM on Sunday early morning. Only two radios are allowed and capped off with no more than 150Watts. No experience required, just signup and someone will give you a hand.

Saturday August 25th The south Texas Balloon Launch Team will be inflating and launching another large balloon; BLT-50. Any individual, groups, teams and/or clubs can build and launch their payloads on these balloons. This one will carty a variety of payload radios including FM and DMR repeaters, Digital TV, and Automatic Packet Reporting System (APRS). See AB5SS for more information.

We’re starting to gain some focused planning on this event. We’ve just reserved the Bluebonnet Pavillion for physical separation from the SSB interference in the shack.   Operations from the Bulebonnet Pavillion will be only for members who are willing to brave the heat, humidity, and mosquitos. This event will be a continuous 12 hour operation from 9:00AM Saturday to 9:00PM Sunday. For more information and planning see W5OC.

October 1 denotes the “other” official NASA 60th anniversary event when the agency opened it doors to the world. Many of the members will be burned out from the Saturday Texas QSO Party, but for those with reserve energy, the Sunday and Monday dates will be feature operations at the W5RRR shack, to reachout on-the-air and disseminate this important milestone.

Belton is the premiere hamfest in the Gulf Coast region. Although its 3.5 hour one way trip to Belton, this is the event to make if you have stuff to sell, or are looking for good deals for treasures to bring back home. Get there early!

We’ve been fortuante to receive funds from the Avionic Systems Division Chief to procure 2 Flex-6500M SDR radios and a 1 highpower amplifier for EME moonbounce operations. The Division Chief recognizes how the JSCARC has been succesfully influencing student interns and the club is a great tool to guide them into Engineering careers. We’ve been tasked to continue our reinforcement of student outreach with the club. Also, another proposal is being vetted this week to potentially fund the 2nd antenna tower and some accessories.   Thanks to all the members who have contributed to our clubs success in outreach. It’s being noticed.

Nominations for Officers are open. If you’d like to put your name in the hat for an office, submit an officer ballot nomination on our website. Nominations will be sent to our Election Volunteers who will run the election at the September meeting.