It started with Terry KG5TJT’s passion and curiosity with his new TYT980 DMR radio.  He bought one and quickly started to learn on his own. He got a few of the rest of us newbies interseted, and before you know it quite a few members have bought a DMR radio as well.

It’s fine time to gush over the consistent growth and participation of the 2m JSCARC Tuesday Night net.

For the regular members who religiously show up- thank you.  I remember the many nights of disappointment when only 3 members would check-in. Tuesday’s check n count are averaging around 18-20 now! 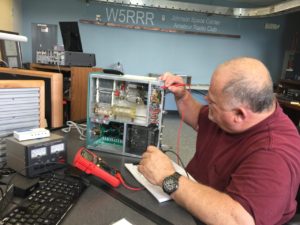 Keith , KG5HOK has been diligently working on an non-working SB200, which he plans to donate to the club via an SK estate from his friend’s father.  The SB200 is a well known workhorse using a pair of 872’s to output close to 700 W out.  Keith has rolled up his sleeves and replaced the aged High Voltage power supply with a new bank of modern electrolytica. 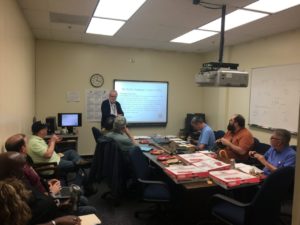 Bob N9RCS has been anchoring a weekly ham radio license class.  Held on Wednesday at lunchtime, this endeavor has been hugely successful as his attendee list has been averaging approximately 8 students, but upwards of 15 students have registered and we’re hopeful most will take the upcoming exam to get their licenses and to join the club. 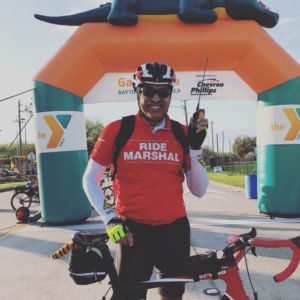 Jayant, KG5LJZ, sent us a few pictures of his mobile HAM ride on March 3.
He was a Ride Marshall for the 63 mile Gator ride over the fred Hartman Bridge.

Many thanks to Ken K5RG for spearheading the 2 hamfest tables for W5RRR.  Ken arrived with two young helpers who were neighborhood hams, Oren KG5AXI and Easton KG5VMM.  Ken and his crew used one of the tables to sell equipment that he was kindly helping a friend’s SK.  The proceeds were partically donated to the club, which was such a kind gesture. 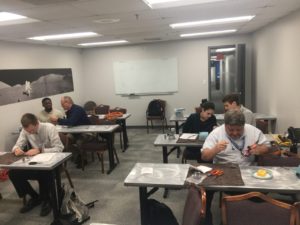 On Thurs March 15, we held our first JSCARC hosted Soldering 101 class. Actually, it was a practice kit building project which included soldering discrete components onto a PCB. Thanks to the wonders of Ebay great deals, 225 small kits of Blinking LED lights was won for use in this type of class.

We primarily offerred this class to the new wave of students currently taking Bob’s N9RCS weekly Tech License Class.  With sheepish advertising, we had a relatively good turnout of 6 students. Most incredibly, we had a great turnout of very generous mentors (Elmers) from the club which were Jeff, AB4ME, Stu W4STU, and Terry, KG5TJT.  This was kind of an experiment on several levels- one was to see if we could use soldering irons without a) setting off the fire alarms; or b) leaving scorch marks on the table.  Turns out that the room did not have the fancy smoke detectors, and nothing was triggerred (whew… since I forgot to bring a fan).  Also, the tables in the room were metallic so there were zero opportunities to leave burn marks in the wood.  Proudly, though, we cut out 2’x2′ swatches  of carpet reminents from our shack reflooring rennovation.  How’s that’s for great conservation/reuse story!

This will be a group build. Designed by John Maca (AB5SS), Stu Donnan (W4STU), and Mike Vandewalle (N8MTV).

Cost of the kit is $45. Please ensure you pay using Friends/Family option – the link below will default to that payment method.

SOLD OUT – THANKS EVERYONE!

There will be a round-table on APRS in Houston by our APRS gurus and led by Walter Holmes K5WH.