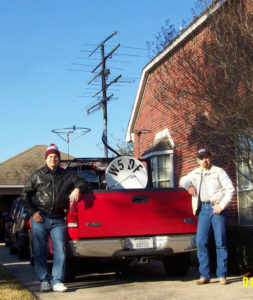 What is a Rover? This is a competitive class in VHF/UHF contest where mobile stations are outfitted with VHF/UHF gear and systematically drive though grid squares permitting them to gain points in each. Rovers provide contact and multiplier (grid square) points for themselves and other contestants as they cross different geographic locations.

“… we basically built a rack for all the radios & amplifiers, all bolted down/secured to the rack.  The seat in the Ford folds up to make room for cargo.  Then I drilled holes in the truck metal seat plate and, well, let’s just say the rack was bolted down and wasn’t going anywhere.  I was concerned about stuff flying if we ever got into a wreck, so…I took care of that concern 🙂

I had to fashion a gasket so I could feed the coax, control/power cables out through the rear window.  It was foam and cut down on wind noise and kept the water out.  It was all quite an integration challenge.

We tried to publish our route ahead of time; what grid we’d be in & when.  We had specific places (high ground with little obstructions) that we’d go to for stops.  But a lot of the time, we’d just make contacts going down the road.  I was the driver and I’d  steer the antennas – I had GPS on my dash, knew the direction I was headed (which changes as you’re going down the road), where the station was and where we were, and I’d real-time calculate the direction to point.  The passenger (Dan, W5DF) was the operator and he made/logged the contacts.  Typically, we’d start on 2m, contact everyone we could, then move up the bands with those stations. ‘Run the bands’

Anyone interested?  The next big Rover event is in June…